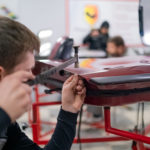 Round dents are like dimples in your car’s metal. They’re often caused by round objects such as hail or even a basketball hitting your car. These dents can have a deep point, like a funnel, or be shallow and smooth. These are the easiest kind for paintless dent repair.

Crease dents are some of the more severe dents that can be fixed with paintless dent repair. They tend to be longer and are often caused when something like a car, bicycle, or tree branch drags against the side of your vehicle. Depending on the size of the dent, paintless repair can be difficult, but Bavarian Body Works technicians can almost always find a solution.

These dents come with different challenges. There isn’t a clear access point like dents on a door, and there’s no easy way to massage the dent with PDR. Those and other factors make it hard to fully repair corner dents, but like creased dents, our technicians will explore all possible options.

Major dents are the kind that results from t-bone accidents or collisions. They often require bodywork, which renders paintless repair useless. However, if there is no bodywork that needs to be done then our technicians can often find a way to fully repair the dent using PDR.

Factors that go into paintless dent repair include:

A major factor in PDR is dent complexity and how creased the dent is. The more complex, the more difficult the repair is. A round dent offers low complexity because there are no sharp angles. If you squeeze a Coke can in the middle and bend it in half, the points that are created at the edges of the crease will permanently alter the form of the can. Crease dents can resemble that sometimes, with the sharp edge of a dent refusing to bend back to its normal shape.

Depth of the Dent

Shallow dents are almost always easier to repair than deeper ones. Deep dents can affect the body panel of the car and damage its integrity. The deeper the dent, the less likely the panel will be to return to its original shape.

If you have a dent on your car and you’re interested in paintless dent repair, contact Bavarian Body Work

At Bavarian Body Works, we service many types of cars and dents. If your car is damaged, we’ll examine every possible solution for paintless dent repair and discuss all options with you in detail. Our first priority is always your safety, so we will ensure your car is returned to its pre-accident condition. Contact us today for more information.